Learn More about Burlington, ON Canada

Burlington is a city in the Regional Municipality of Halton at the northwestern end of Lake Ontario in Ontario, Canada. Along with Milton to the north, Burlington forms the west end of the Greater Toronto Area, and is also part of the Hamilton metropolitan census area. Burlington lies between Lake Ontario’s north shore and the Niagara Escarpment.

Before pioneer settlement in the 19th century, the area was covered by the primeval forest that stretched between the provincial capital of York and the town of Hamilton, and was home to various First Nations peoples. In 1792, John Graves Simcoe, the first lieutenant governor of Upper Canada, named the western end of Lake Ontario “Burlington Bay” after the town of Bridlington in the East Riding of Yorkshire, England.[3] By the time land beside the bay was deeded to Captain Joseph Brant at the turn of the 19th century, the name “Burlington” was already in common use. With the completion of the local survey after the War of 1812, the land was opened for settlement. Early farmers prospered in the Burlington area because the area had fertile soil and moderate temperatures. Produce from the farms was shipped out via the bustling docks of the lakeside villages of Port Nelson and Wellington Square, as well as Brown’s Wharf in the nearby village of Port Flamborough (which was to become Aldershot). Lumber taken from the surrounding forests also competed for space on the busy docks. However, in the latter half of the 19th century, increased wheat production from Western Canada convinced local farmers to switch to fruit and vegetable production.

In 1874, Wellington Square and Port Nelson were incorporated into the Village of Burlington. However, the arrival of large steamships on the Great Lakes made the small docks of the local ports obsolete, and the increased use of railway to ship goods marked the end of the commercial wharves.

Farming still thrived though, and the resultant growth resulted in continued prosperity. By 1906, the town boasted its own newspaper—the Burlington Gazette—as well as a town library and a local rail line that connected Burlington to nearby Hamilton. During the First World War, 300 local men volunteered for duty in the Canadian Expeditionary Force—38 did not return. In 1915, Burlington was incorporated into a town.

As more settlers arrived and cleared the land, cash crops replaced subsistence farming. Gradually, mixed farming and market gardens became the dominant form of agriculture, and in the early 20th century the area was declared the Garden of Canada. The first peaches grown in Canada were cultivated in the Grindstone Creek watershed in the city’s south-west part. The farming tradition has passed down through the generations. Today over forty percent of the Grindstone Creek watershed is still devoted to farms, orchards and nurseries.[4]

Following the Second World War, cheap electricity from nearby Niagara Falls and better transportation access due to the new (1939) Queen Elizabeth Way encouraged both light industry and families to move to Burlington. The population skyrocketed as new homes were built, encouraging developers to build even more new homes. On 1 January 1958, Burlington officially annexed most of the Township of Nelson, as well as Aldershot, formerly a part of East Flamborough Township. By 1967, the last cash crop farm within the city had been replaced by the Burlington Centre.[5]

By 1974, with a population exceeding 100,000, Burlington was incorporated as a city. The extremely high rate of growth continued, and between 2001 and 2006, the population of Burlington grew by 9%, compared to Canada’s overall growth rate of 5.4%. By 2006, the population topped 160,000. Continued high rates of growth are forecast as farmland north of Dundas Street (former Highway 5) and south of Highway #407 is developed into more suburban housing.

Burlington is at the southwestern end of Lake Ontario, just to the north east of Hamilton and the Niagara Peninsula, roughly in the geographic centre of the urban corridor known as the Golden Horseshoe. Burlington has a land area of 187 km2 (72 sq mi). The main urban area is south of the Parkway Belt and Hwy. 407. The land north of this, and north Aldershot is used primarily for agriculture, rural residential and conservation purposes. The Niagara Escarpment, Lake Ontario and the sloping plain between the escarpment and the lake make up the land area of Burlington. The city is no longer a port; sailing vessels in the area are used for recreational purposes and moor at a 215 slip marina in LaSalle Park. The 2.2 km long Skyway Bridge is a prominent landmark.

Burlington’s climate is humid continental (Köppen climate classification Dfa) with warm, humid summers and cold, somewhat drier winters. The climate is moderated by its proximity to Lake Ontario. Monthly mean temperatures range from 22.5 °C (72.5 °F) in July to −4.4 °C (24.1 °F) in January. The average annual precipitation is 763 millimetres (30.0 in) of rain and 99 centimetres (39 in) of snow.

Although it shares the temperate climate found in Southern Ontario, its proximity to Lake Ontario moderates winter temperatures and it also benefits from a sheltering effect of the Niagara Escarpment, allowing the most northerly tracts of Carolinian forest to thrive on the Escarpment that runs through western sections of city. Several species of flora and fauna usually found only in more southern climes are present in Burlington, including paw-paw, green dragon (Arisaema dracontium), tuckahoe (Peltandra virginica), American columbo (Frasera caroliniensis), wall-rue (Asplenium ruta-muraria), plus the Louisiana waterthrush, the hooded warbler, the southern flying squirrel and the rare eastern pipistrelle. Near the visible promontory of Mount Nemo that rises some 200 m (650 ft) above the lake level, a “vertical forest” of white cedar clinging to the Escarpment face includes many small trees that are more than a thousand years old.[6]

Hamilton Harbour, the western end of Lake Ontario, is bounded on its western shore by a large sandbar, now called the Beach strip, that was deposited during the last ice age. A canal bisecting the sandbar allows ships access to the harbour. The Burlington Bay James N. Allan Skyway (part of the Queen Elizabeth Way), and the Canal Lift Bridge allow access over the canal.

Burlington’s economic strength is the diversity of its economic base, mainly achieved because of its geography, proximity to large industries in southern Ontario (Canada’s largest consumer market), its location within the Greater Toronto and Hamilton Area (GTHA) and proximity to Hamilton, and its transportation infrastructure including the Port of Hamilton on Burlington Bay. This diversity has allowed for sustained growth with regards to the economy.[14] The city has a robust economy with potential for growth – it is at the hub of the Golden Horseshoe, is largely driven by both the automotive and manufacturing sectors.

Burlington Centre and Mapleview Centre are popular malls within the city. The many summer festivals in the city, include Canada’s Largest Ribfest, and the Burlington Sound of Music Festival which also attract many visitors.

Recreation and sites of interest: 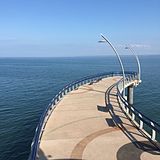 The Brant Street Pier opened in Spencer Smith Park during the Sound of Music Festival on Father’s Day weekend 2013.[21] Thousands of people from Burlington and beyond flocked to the pier to enjoy sunshine and scenic views. The pier extends 137 metres over Lake Ontario and provides views of the lake and Burlington’s shoreline.

The Art Gallery of Burlington is adjacent to Spencer Smith Park, and contains diverse permanent and changing exhibits. The Gallery houses a prominent collection of Canadian ceramics. The Gallery’s exhibition spaces, which feature new exhibitions every eight to ten weeks, are fully accessible and are free to visitors.[22] 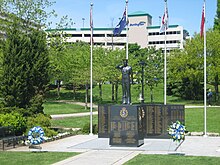 “Royal Canadian Naval Association Naval Memorial (1995)” by André Gauthier is a 6’4″ high cast bronze statue of a WWII Canadian sailor in the position of attention saluting his lost shipmates, which was erected in Spencer Smith Park. The model for the statue was a local Sea Cadet wearing Mike Vencel’s naval service uniform.[23] On the black granite base, the names of Royal Canadian Navy and Canadian Merchant Marine ships sunk during WWII are engraved. On the granite wall, the names of all Royal Canadian Navy ships and Canadian Merchant Marine vessels which saw service in WWII are engraved.[24] A monument commemorating the Korean War was erected in the summer of 2014 to mark the 61st anniversary of the armistice to end the war.[25]

Burlington is home to the Royal Botanical Gardens, which has the world’s largest lilac collection. Ontario’s botanical garden and National Historic Site of Canada features over 2,700 acres (11 km2) of gardens and nature sanctuaries, including four outdoor display gardens, the Mediterranean Garden under glass, three on-site restaurants, the Gardens’ Gift Shop, and festivals.

Lasalle Park, in the Burlington neighbourhood of Aldershot, is owned by the city of Hamilton but is leased by Burlington, which also assumes responsibility for maintenance.

Several conservation areas are minutes away and feature year round activities. Mount Nemo Conservation Area is the only area in Burlington that is operated by Conservation Halton. Bronte Creek Provincial Park, along the city’s eastern boundary, features a campground and recreational activities and events year-round.

The local sections of the Bruce Trail and the Niagara Escarpment, which is a UNESCO designated World Biosphere Reserve, provide excellent hiking opportunities. Kerncliff Park, in an abandoned quarry on the boundary with Waterdown, is a naturalized area on the lip of the Niagara Escarpment. The Bruce Trail runs through the park, at many points running along the edge of the cliffs, providing a clear overlook of Burlington, the Burlington Skyway Bridge, Hamilton, and Oakville. On a clear day, one can see the CN Tower in Toronto, approximately 50 kilometres (31 mi) from the park.

The Burlington Performing Arts Centre opened in 2011. This 940-seat facility is on Locust Street in the downtown core. It contains two theatres for theatrical and musical performances.

You have waited long enough...

You have waited long enough...

Brought to you by Wikipedia